Even the extreme optimist will tell you that when you’re struggling at 35-5 after 8 overs chasing 126 on a final, you are up against it. People will write you off, tell you that you’ve under achieved on the biggest stage and the only thing you can do is sit back and accept that you’re second best. Just then, a ray of hope enters your world, everything seems bright again and that little faith takes you to a better world. The lesson: it isn’t over until it is really over!

For a passionate cricket follower like me who always had a dream of playing a 5 day test match, you don’t really get to play big games that often. The only shot at playing proper cricket is in the college sports week and this time was the last of such amazing sports for us, the fourth year Acers. That made this year’s sports week even more special; the chance to leave Ace on a high as champions for the second time in 4 years. Victory would be even sweeter if we could dedicate our win to our talisman, our captain, Ayush Sharma who left for  the UK two years back.

The dream was there- to win our final sports week but did we have the resources to do it? Considering the fact that cricket is more technical than football, you would be wise to accept the fact that in a semester team, you wouldn’t get all specialists and even getting a few people who actually follow cricket would be a bonus. However, as the captain of the team, I was lucky to inherit a balanced team that was full of team players, a team that was nurtured and developed by our former captain. My team included:

Prabin ‘Pritam Da’: A consistent and reliable all-rounder, who I could easily turn to.

Aayush (Tontey): A fast runner, who you could count on to put the fielders under pressure and grind out runs in even the tightest of field setups.

Pranab: An experienced campaigner with the bat and the bowl.

Utsab: Most passionate among the group. Deadly with the bat and consistent with the ball.

Animesh: It wasn’t until a few days prior to the first match of the last year when we realized we’ve got a gem in our hands. A lethal spinner who would later go on to prove what he could do with the bat.

Akshay: Our strike bowler who didn’t even realize he could be so good with the ball (kudos to Ayush for getting the best out of him over the years)

Subash: The bowler we would turn to when we needed to break partnerships. By far, the best catcher in our team.

Nischay: Made his come back to the team after three years amid some suspicion but did ever so well to justify the faith shown in him.

Deshish: Our most reliable fielder who would chip in some runs as well.

Rohit: A good example of a team player who always stepped up when the team needed him.

Sagar: That would be me! Like the boys say, Captain!

From 35-5 after 8 overs, a brilliant knock from Pranab (45) and a good support from the other lads saw us take an almost dead game down to the wire. With a last over boundary from Animesh and some desperate running, a run from the last ball of the innings ensured a flourishing finish to our Ace cricket sports week, a dream that we all had since the beginning of the year. With the whole team jumping up and down in sheer joy and excitement, I couldn’t help but reflect on what an amazing 4-5 days of team glory we had achieved; especially after such an incredible win in the final. Every single delivery was a battle for us and we did ever so well to fight hard as a unit. This amazing group of individuals will always be an inspiration to me because I learnt so much from them during this tournament. A few things that stand out for me:

Let go- past is past!

Ever since our first sports week together, Nischay and I shared an awkward relationship. Maybe it was because of the run out at that time, I don’t know, but for some reason we wouldn’t talk. Not only talk, we wouldn’t even bother to face each other during break time. But for this year’s final tournament, he really wanted to play but there was a slight complication- I was the captain and I would be selecting the team. Now see, it would have been really easy for me to say don’t bothering coming all the way to Bhaktapur, you won’t play in my team because you’ve always given me that cold stare every time. However, I let go of all those negative energy between us, thought it through and realized that he would add depth to our batting and bowling and included him in the team. What happened next? Well, in the first two overs, he dismissed the opening batsman with a brilliant direct hit! He would later go on to do really well with the bat in the semifinal and also took 4 wickets in the final. Imagine what might have happened if I hadn’t let go of the past!

The team spirit is your 12th man

We had 12 players, our opponent had 11 and in all our games, we made that extra man count. That extra man was our team spirit, our supporters and the passion we shared to make this success happen. When I went to bat with the team nearly out in the semifinal, I didn’t see that spirit in our opponent. It left me surprised because had we been there in their shoes, we would have put so much pressure on the batsman through our team spirit. Citing the absence of the 12th man, I pulled the game back with my knock of 37* and we marched on to the final. In that moment I realized that yes, it’s advantageous to have team members who are fully skilled but what’s more important is the spirit within the team. We may not have had 11 top cricketers but what we had, that was lacking in others was a spirit to succeed, a spirit to unite and fight together to achieve our goals.

Even though he couldn’t be here with us, Ayush Sharma (our former skipper) and Shristi Mishra (our team manager) were our biggest supporters who cheered for us every ball. Shristi hasn’t missed a ball over the past 4 years. As for Ayush, time zone difference didn’t matter as he wouldn’t sleep all night and followed our game ball by ball through special commentary from our manager. Ayush and I would discuss team tactics, line up and more for hours prior to the match day. His confidence in me and the team gave us support and at times a lot of pressure (but that is what spurred us to perform). For us, these two were always the part that formed our 12th man without whom we couldn’t have done it. It shows that when people are there to see you do well, support you through thick and thin, you feel that extra motivation to do well. Even at times when you aren’t at your best, your well-wishers push you to get through. Always make that spirit count.

It’s not over until it’s really over.

It couldn’t have gotten any worse than being at 35-5 in 8 overs when you’re chasing 126 on a final. I think all our players would admit losing hope at some point in the game. However, Pranab with his brilliant 45, Amul who supported Pranab superbly, Animesh with that crucial 4 in the final over and Akshay with his blazing sprint for the winning run proved that it isn’t over until it really is. I could relate this so much with life. There will be times when we feel like giving up because things aren’t going our way. We feel that there’s no hope. But out small efforts to get thing back in order will force the nature to make miracles happen. When you are positive, trust yourself and with the love and support from the people who want to best for you, you can really make things happen because you aren’t OUT just yet.

Captaining this team gave me immense opportunities to learn about what it takes to lead a team; things that merely reading a text book on leadership alone wouldn’t have sufficed. Having faith in your people, like in Nischay’s case even those people who you don’t have the best of terms to start with can help you turn the corner. Everyone’s capable and have their own ways of expressing themselves. We didn’t have a team with 11 perfect cricketers but we did have 11 people who were willing to give their best; to contribute to the team in whatever small ways we could. During the team huddle before every match I always made an effort to make them realize that everyone had a job to do and they were the best people to make that job successful.  What I also found out was that you don’t need a formal leadership position to lead the team. You just have to set the example, set the benchmark and take everyone in your stride like Pranab did. At 35-5, he kept his cool, made his innings slowly and before you knew it, he took us to a winning position and from there on, Animesh and co. did the rest.  I feel that when you’re leading, it’s important to trust your instincts at times and more importantly, trust the power that the individuals in your team hold, for everyone is unique and have incredible power to take the team to greater heights.

I hope you too can relate with teams that you have worked with, it doesn’t necessarily have to be a sports team. I wanted to share this because this tournament and this team have made me realize so many things but leadership, potential of people, how important it is to get go of the things from the past  and also about enjoying, cherishing and becoming inspired from small things in life. I want you to take pride in the teams you have been blessed to work with, go back and appreciate the small moments in which a team mate of yours pulled you back again when the team seemed to be heading nowhere and realize that at times, the sheer joy and incredible feeling of accomplishing even the small things in life as a team is far more satisfying than achieving success on all your own because like Barney says, “ Whatever you do in life, it isn’t legendary unless your friends are there to see it”.

For one last time, 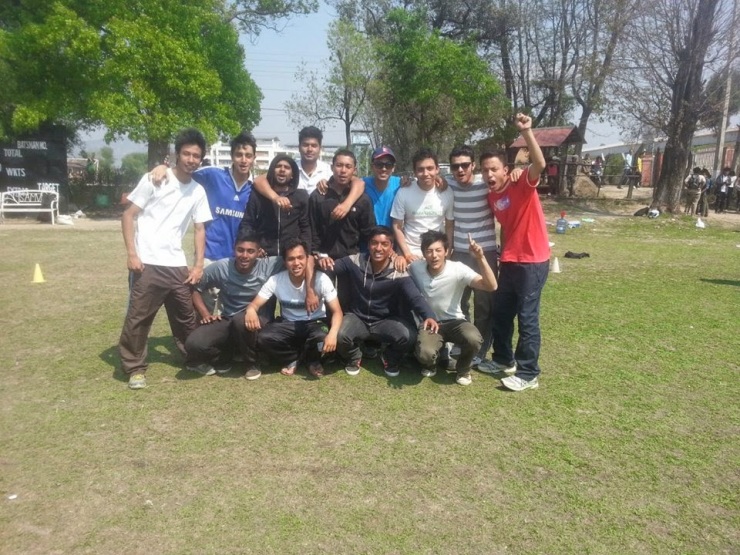